Heaven help me! These were amazing!!!! They could easily be savory, but as sweet crepes, they are just a raging success. It’s nice when I tinker in the kitchen and come up with something this good.

I had these with some blueberries and a bit of sugar-free maple syrup, and it was just so decadent as a sweet breakfast or a dessert. If you want them savory, you could use a bit less of the sweetener though there is really not much added anyway. I was thinking that these would also be great with a sugar-free jam or jelly spread over the top as well.

Put all ingredients into a blender, and puree until consistent texture. Let it sit for two minutes.

In a crepe pan or 8-inch skillet, put a bit of butter or nonstick spray down over medium heat. Pour 1/4 cup of batter at a time to cook each crepe. Cook the crepe until edges are lightly browned on each side (about 2-3 minutes per side). You can shorten the cooking time if you would prefer that the crepe have no browning.

Remove to a plate and roll.

This tastes like a baked potato! I could eat this ALL DAY. Since the weather has gotten cooler, I have started using the oven again. I have been eating some of this for lunches and dinners. I am nowhere near sick of it yet, and my entire family loves it. It also is a total crowd pleaser at gatherings.

You could make this without the chicken, but I find that it’s a good protein boost and has about 6 net carbs in a 1.25 cup serving. It has about 35 grams of protein as well!

This was an amazing recipe originally from food.com, and I tweaked it a little bit.

Preheat the oven to 350 degrees.

Cook the bacon in the skillet until crispy. Remove bacon to a paper towel, and pour the grease out of the skillet.

Add the cauliflower to the skillet and cook on medium-high heat for ten minutes, stirring occasionally.

Put mixture into a baking dish, sprinkle with remaining cheese, and cook for 20 minutes. Chop bacon and add to the top along with the remaining green onion.

Well, this was like feeding frenzy style good. As most know, you can have limited berries on Keto, so I decided that this would be my alternative to other sweets. I used four medium-sized ones for a total of 2.7 net carbs. You could also use a mixture of blueberries and raspberries as well.

It was INCREDIBLY good. I used my husband’s frother that he uses to make latte’s in order to give this some more texture. It was definitely well worth it and made the cream better. Before the frothing, I added pure stevia to make the cream sweeter. I was sad when I reached the bottom of the bowl. 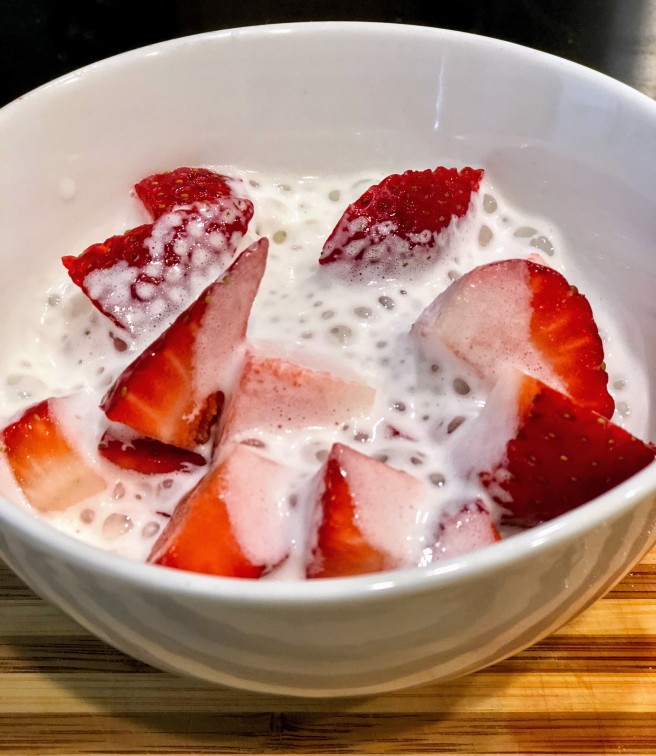 In a tall glass, add the heavy whipping cream or half and half. Add the sweetener to it and froth until nice and fluffy or bubbly.  Spoon over strawberries in a bowl and enjoy!